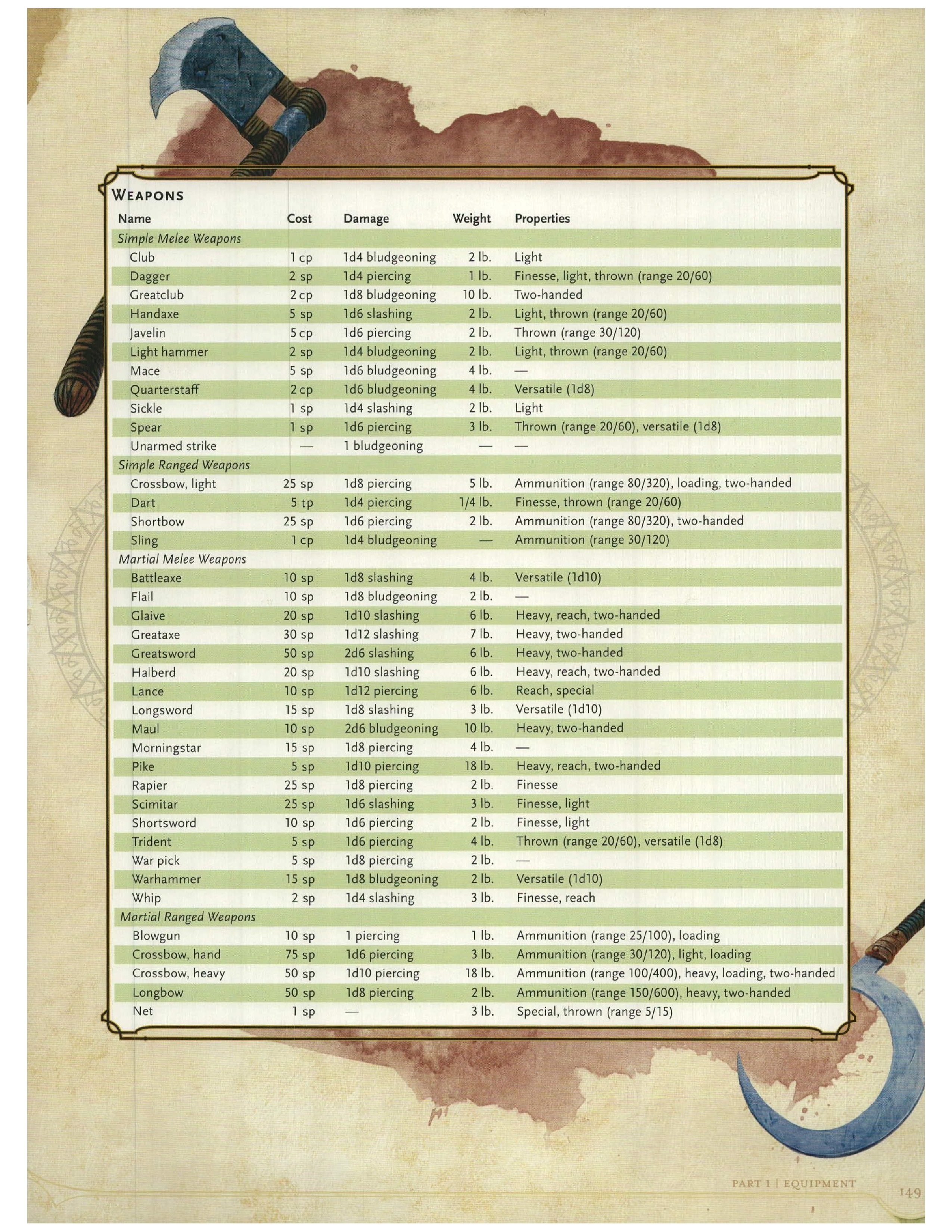 Finesse.
When making an attack with a finesse weapon, you use your choice of your Strength or Dexterity modifier for the attack and damage rolls. You must use the same modifier for both rolls.

Light.
A light weapon is small and easy to handle, making it ideal for use when fighting with two weapons. See the rules for two-weapon fighting in chapter 9.

Loading.
Because of the time required to load this weapon, you can fire only one piece of ammunition from it when you use an action, bonus action, or reaction to fire it, regardless of the number of attacks you can normally make.

Reach.
This weapon adds 5 feet to your reach when you attack with it.

Special.
A weapon with the special property has unusual rules governing its use, explained in the weapon’s description (see “Special Weapons” later in this section).

Thrown.
If a weapon has the thrown property, you can throw the weapon to make a ranged attack. If the weapon is a melee weapon, you use the same ability modifier for that attack roll and damage roll that you would use for a melee attack with the weapon. For example, if you throw a handaxe, you use your Strength, but if you throw a dagger, you can use either your Strength or your Dexterity, since the dagger has the finesse property.

Two.Handed.
This weapon requires two hands to use.

Versatile.
This weapon can be used with one or two hands. A damage value in parentheses appears with the property-the damage when the weapon is used with two hands to make a melee attack. " .

IMPROVISED WEAPONS
Sometimes characters don’t have their weapons and have to attack with whatever is dose at hand. An improvised weapon includes any object you can wield in one or two hands, such as broken glass, a table leg, a frying pan, a wagon wheel, or a dead goblin. In many cases, an improvised weapon is similar to an actual weapon and can be treated as such. For example, a table leg is akin to a dub. At the DM’s option. a character proficient with a weapon can use a similar object as if it were that weapon and use his or her proficiency bonus An object that bears no resemblance to a weapon deals ld4 damage (the DM assigns a damage type appropriate to the object). Ir a character uses a ranged weapon lo make a melee attack, or throws a melee weapon that does not have the thrown property, it also deals ld4 damage. An improvised thrown weapon has a normal range of 20 feet and a long range of 60 feet.

SILVERED WEAPONS
Some monsters that have immunity or resistance to nonmagical weapons are susceptible to silver weapons, so cautious adventurers invest extra coin to plate their weapons with silver. You can silver a single weapon or ten pieces of ammunition for 100 gp. This cost represents not only the price of the silver, but the time and expertise needed to add silver to the weapon without making it less effective.

Blowgun: The blowgun is primarily used for the purpose of poisoning someone at range.

Lance: You have disadvantage when you use a lance to Attack a target within 5 feet of you. Also, a lance requires two hands to wield when you aren’t mounted. While not taking the overly conical shape of the stereotypical “knightly jousting lance” a lance is different from a spear due to reinforcement with leather & metal as well as a longer head with a deeper tang.

Net: A Large or smaller creature hit by a net is Restrained until it is freed. A net has no effect on creatures that are formless, or creatures that are Huge or larger. A creature can use its action to make a DC 10 Strength check, freeing itself or another creature within its reach on a success. Dealing 5 slashing damage to the net (AC 10) also frees the creature without harming it, ending the effect and destroying the net. When you use an action, Bonus Action, or Reaction to Attack with a net, you can make only one Attack with the Net regardless of the number of attacks you can normally make.

Polearm: The polearm category includes a wide variety of weapons such as what we would call the glaive, ranseur, & halberd. Any weapon that is primarily a spear but with added accouterments for slashing or bashing is a polearm.

Pugio Acinaces: Or “Court Sword” is a longer, thinner blade used in one hand to slip between the chinks in weak points of armor. However, unlike the rapier, it is usually not worn openly but instead is hidden in walking sticks for the offense of assassins or the defense of nobles.